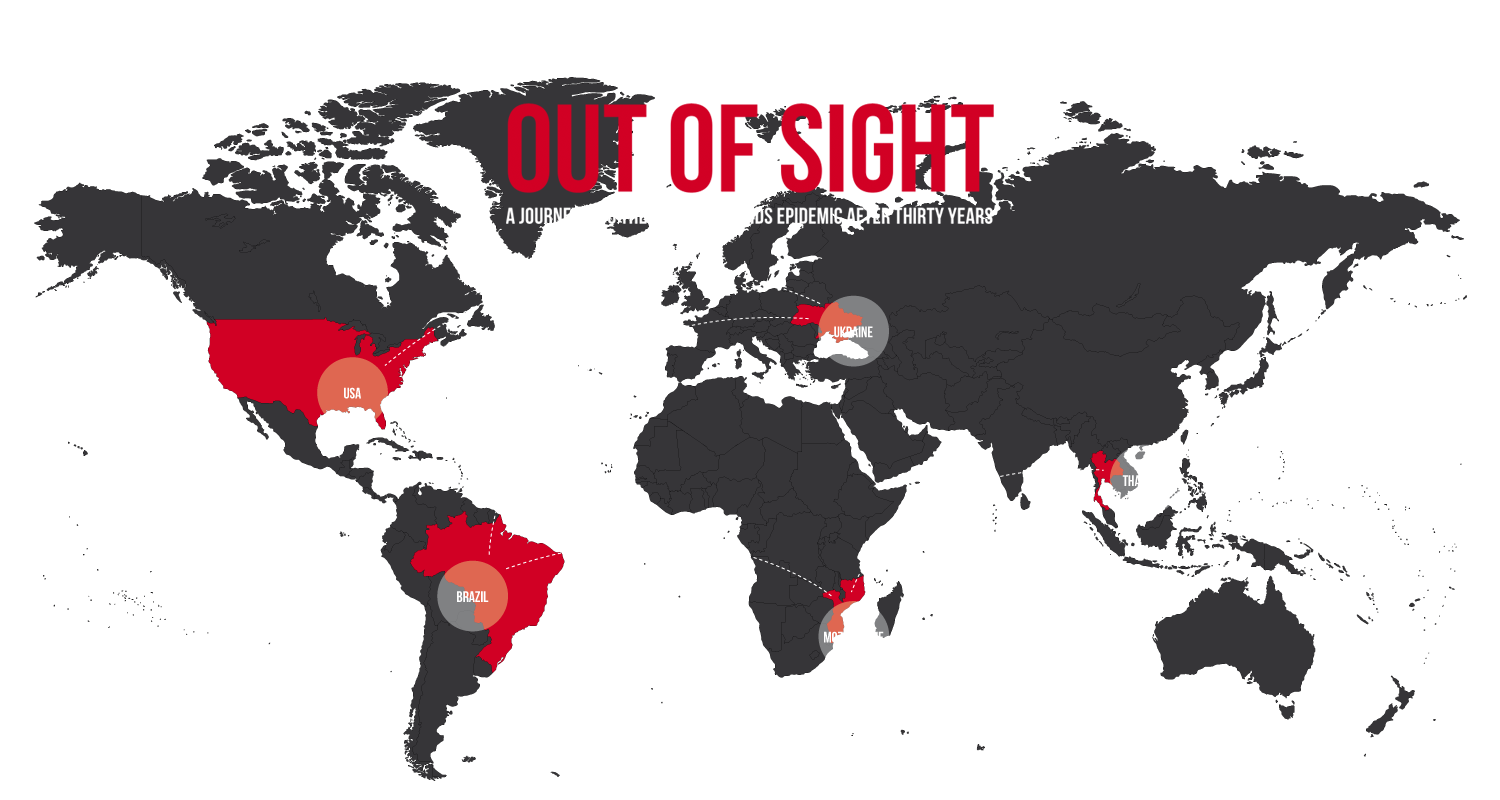 I started my journey into the HIV/AIDS epidemic the day I picked up the results of the HIV test I took a few days after the 21st World AIDS Day in 2009. When I was a blood donor, I used to be tested regularly but a decade had passed since the last time I gave my blood, and maybe three or four years since the last HIV test I took. I felt it was time to return to the old good habits only after I met Lesbia, the first person living with HIV I have ever photographed, and after I fell in love with the woman with whom I got tested again and who would eventually become my wife.

When Eva and I went to pick up the results, I was quite worried. I thought of AIDS as a topic on which all had already been said, something outdated. After having a conversation with the clinic’s physicians, I realized I was way too much ignorant about the epidemic and committed myself to work on it as soon as possible, both as a way to fix my ignorance and contribute to raise awareness among the general public.

When I landed in Bangkok, determined to work on sexual health and HIV prevention, I didn’t know I was about to immerse in such a sensitive, controversial and pervasive issue, for so long and in so many countries. I soon realized it would have been very hard to visually return – in an accessible and comprehensive yet not stereotyped way – the complexity of the HIV/AIDS epidemic, all the nuances and struggles that made this disease unique among all epidemics known to man.

I started exploring critical aspects of the epidemic in a way that was too bound to the outlines provided by the words that serve as guidelines in the fight against AIDS: prevention, treatment, care and support. A way that was somehow forcing me to shoot in an overly didactic mood that was lessening the extent of my investigation and, worse, was shutting out my emotions.

I tried to let them back in looking for a different approach, one that would allow me to photograph and express myself in a more personal way. A challenge with a lot of selfquestioning but also much light-mindedness, which I had lost for a while and that, instead, should always be with us when taking pictures, even when the work gets emotionally and psychologically engaging. From then on, I’ve worked focusing on the feelings I was experiencing while working on and learning about the epidemic in each country. The result is here for you to see.

Out of Sight was produced with major funding by the World Health Organization. I’ve investigated the epidemic in five countries - Thailand, Mozambique, Brazil, Ukraine and the U.S. - between December 2010 and October 2013. Given the complexity of the epidemics, I knew from the beginning I could not be exhaustive and explain all that has happened and still is happening. Nevertheless, I wanted Out of Sight to be also a prevention tool to inform people about the ongoing global HIV/AIDS epidemic. I wanted it to be a versatile instrument that can be easily used anywhere there’s the will to keep alive the talk about AIDS. Hence, each chapter is enriched with an article written by a journalist who traveled with me, with easyto- read downloadable and printable infographics and with visual insights. Ideally, Out of Sight is also going to be, hopefully soon, a touring exhibition and a book. That’s another part of the journey tough and I’m still working on it.

I’m very happy to finally see the whole project online for the first time today, the 25th World AIDS Day. I’m very glad you reached Out of Sight and, needless to say, I really hope you enjoy it. 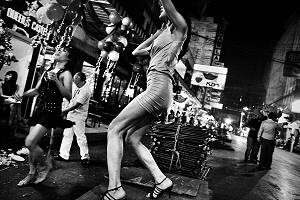 In Thailand, destination par excellence for sex tourism around the world, the main driving force of the epidemic has been unsafe sex, and this has disproportionately affected women and men of reproductive age. Since its very first AIDS case report back in 1984, HIV prevention and control have always been a national priority at the highest level: by taking major steps in the early 1990s to promote awareness of safer sexual practices, the kingdom became a role model for the region and the world. However, in the new millennium there were signs of complacency. The major reasons for HIV transmission today include declining HIV knowledge, an increase in multiple partners and inconsistent condom use.
go to chapter 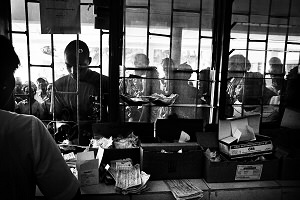 Although the rate of new HIV infections is on the decline, the total number of people living with HIV continues to rise. Mozambique ranks third out of the 25 low and middle-income countries with the highest estimated numbers of pregnant women living with HIV and in need of ART. Out of the 400 daily new infections, some 85 are children infected through MTCT. In Mozambique, the need to confront openly the issue of sexuality and to address the taboos and myths around sexual and reproductive health is still very strong. Besides, 40% of the women become pregnant before the age of twenty, facing a risk of death four times higher compared to pregnant women above the age of 20.
go to chapter 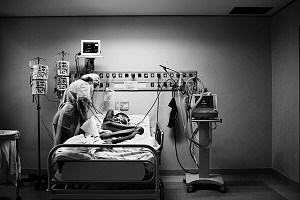 About one third of all people living with HIV in Central and South America live in populous Brazil, where early and ongoing HIV prevention and care efforts have contained the epidemic. The Brazilian response to the AIDS epidemic is based on the principle that all people have the right to health. The Brazilian Government has guaranteed universal and free of cost access to ART since 1996. Social participation has been a key element for the implementation and evaluation of public health policies as well as the Government prioritization of the public interest in relation to economic and market interests.
go to chapter 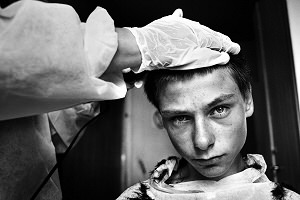 Eastern Europe and Central Asia bear the largest regional increase in HIV prevalence and the number of HIV+ people has almost tripled since 2000. In Ukraine, as the epidemic spreads from predominantly male people who inject drugs to their sexual partners, the proportion of women living with HIV is also growing. The number of infected pregnant women has increased two-fold in the last few years and, as a consequence, an increasing numbers of children are born with HIV. Most of these children are born into socially disadvantaged families where insufficient knowledge about HIV/AIDS contributes to fear, stigma and discrimination. The communities are not ready to provide appropriate support and some 10% of children born to HIV+ mothers are abandoned and find refuge on the streets, where they run higher risks of contracting HIV.
go to chapter 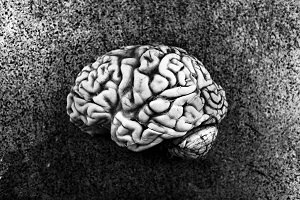 One decade after the introduction of highly active antiretroviral therapy the U.S. have witnessed a dramatic decrease in mortality rates and increased life expectancy among people living with HIV/AIDS. With new HIV infection rates remaining level, the net result is an HIV+ population that is both graying and growing. Almost 27% of all people living with HIV in the United States are aged over 50. Estimates say that by 2015, more than 50% of the people living with HIV in the US will be aged over 50. The interaction of HIV with the aging process and common co-morbidities of aging, such as cardiovascular disease, osteoporosis and dementia, are inevitable. Yet there is little research and even less acknowledgment or foresight anticipating this consequential commingling of HIV and aging co-morbidities.
go to chapter 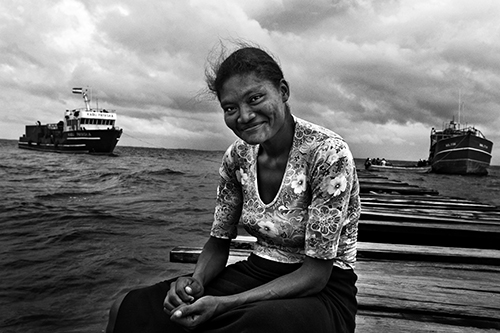 It all started after I met Lesbia, the first person living with HIV I've ever photographed. Puerto Lempira, Honduras 2009